I’m pleased to report that as of Wednesday August 15, 2012 my summer of 2012 officially began. I’ve spent the past 3 months waiting for summer to begin…well more specifically, I’ve been waiting ever since I saw everyone’s beautiful pictures of May 24 weekend for the weather to make its way over to England. I waited and waited…I resisted from turning on the fireplace in June…I bundled up in my warmest wool sweater and enclosed myself in the warmth of my duvet and waited for the sun and heat to beckon me out of hibernation. I was fooled a few times. There were days where the sun playfully teased me into thinking it was going to make a long-term appearance but it disappeared almost as quickly as it came.

But the joke’s on you, England! Because I managed to escape your cold clutch and am now in Sardinia until September enjoying/suffering from a kind of a heat I haven’t experienced since my last summer in Sardinia. 38 degrees without a cloud in the sky…it would be unbearable if I wasn’t on an island surrounded by sea, sea, and more sea! But I guess I should now mention that it’s been 30 degrees in England for the past few days…the irony has not been lost on me.

Most of my days have so far been spent on various beaches and indulging in Italian cuisine. M’s family is here visiting as well so the days have been activity-filled and have left me with droopy eyes at 11pm. Those who know me should be well aware of the fact that in normal circumstances hitting the sack before 2am is preposterous. 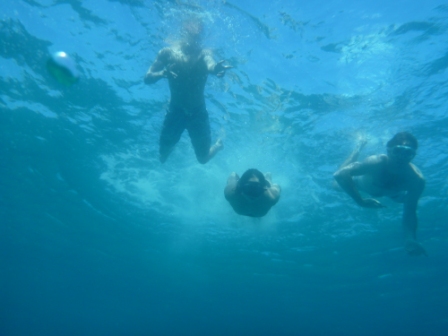 Dip in the sea

I stepped on the scale the first day I arrived and the number staring back at me read 64kg. That equals to approximately 140 pounds. I’m stating this to the world as motivation not to turn into a gigantic pig after my stay here comes to an end. I’ll let you know the final figure, but just as an FYI it’s only been 5 days since I touched foot on Italian soil and I’m really afraid to step on that scale now. Especially since I have 2 agriturismo’s coming up…stay tuned if you haven’t a clue what I’m talking about.

Since I’m here for 3 weeks this will give me a real opportunity to experience ‘The Sarda Life’. My goal is to write daily posts until I head back to England stating facts about the Sarda life. The good, the bad, and the ugly! Oh, and another FYI…it’s not all playtime for me. It’s 1pm and everyone has left for the beach. I, unfortunately, have sacrificed the beach day to work. The reason why I’m here for so long is because M had 20 days of vacation days left to use until the end of September (typical European vacation days typically amounts to 25 days :S). While we don’t have the means to go on a “real” vacation for 20 days it’s lucky for us that M happens to live in a place fit for the perfect vacation. So here I am on my computer “working from home”. So…I guess I should stop blogging and get started on my work, ya?

One thought on “The Sarda Life”