I’ve never considered myself to be an overly lucky person. I had a one-off incident in Macau back in 2009 where I won approximately $400 playing roulette. Normally, you’d catch me at the penny slots because I hate the thought of gambling away all my money, but I’d gone to see a fortune teller in Hong Kong the night before (Chinese people are HUGE into fortune telling and my sisters and I went to see one just for sh*ts and giggles) and he rambled off my lucky numbers. I won’t repeat them just in case it’s bad luck…Chinese people are also extremely superstitious.

I gave into peer pressure after much urging from my sisters and boldly went to the roulette table that was only occupied by older men. I placed my bets and won – 3 times in a row. Maybe there’s something to be said for fortune tellers…

I thought that was the end of my lucky streak…then this week happened. Let’s rewind…

I went up to Stratford-upon-Avon for a mini business trip last week and somehow ended up at an event I never imagined myself attending in a million years. I attended a Cricket Benefit in the Cotswolds. I have an imaginary ‘Very English things to do while living in the UK’ bucketlist, consisting of things like:

It wasn’t my intention to attend a cricket benefit, but I added it onto my bucketlist (post-event) and awarded it the title of being the most English thing I’ve done to-date.

Apparently, benefit years/seasons are a pretty popular concept in the UK (maybe Canada too, but I’m so not into the sporting scene that I’m not really sure. Feel free to pitch in your comments). Benefits are held by professional sportspeople (I think cricket and rugby are the most popular ones) as a way of financially compensating them for being a longtime player. It started out as a way to help out professional players who were generally paid low wages and out of work by age 40.

Players are allowed to apply for one benefit throughout the course of the sports career to raise funds. Benefit seasons typically comprise of dinners, auctions, balls, and other big events to raise money and depending on how much effort is put in, players can make a few ten thousands of pounds to as much as a few hundred thousand pounds! It’s a pretty prestigious affair since the whole year is dedicated to celebrating the player (Imagine that, just having a whole year dedicated to raising money for yourself by throwing parties!).

Since players are now awarded pretty decent wages it’s now common to give away part/all of the funds raised over the course of the year to a charity of choice.

Anyhow, one of the players in the region has just started his benefit year and since my boss’ wife is on the cricket committee I was invited to attend. Lemme tell ya, I felt more out of place there than when I stepped into a hillbilly buffet in the mid-west during my cross-country road trip across the US. I stepped into the restaurant and had people gawking at me like a zoo animal. I’m not sure if it was because they’d never seen an Asian person before or if it was because they’d never seen anyone under 150 lbs before.

The pub the benefit was held at was a COMPLETE sausagefest (people who don’t know the term, a sausagefest refers to an event that is dominated by males) and I was one of four females there. The other was my boss’ wife and the servers. I felt like I was in the gentlemen’s club. I’m still not used to being the outsider, though I’ve become pretty pro at answering the typical questions I get when people first meet me. A typical dialogue generally goes as follows:

Person: Are you American?

Me: No, I’m Canadian (I love wearing my Roots Canada zip-up for this very reason)

Me: Wow, really? Where from? Maybe I know her!

Person: So it’s probably really warm here compared to where you’re from.

Me: (Are you bloody kidding me? It’s flippin’ freezing here and just because I’m from Canada doesn’t mean I’ve got dinosaur hide) Oh yes, I’m very grateful for the sub-tropical weather you’ve got here…it’s terribly inconvenient living in an igloo. Every time I try to turn the heating on, my house just melts away.

Person: Ha! You said ruff!! Listen everyone! She calls a roof a ruff!

Moving along…I spent the night trying to care/learn about cricket but up until then I knew absolutely NOTHING about it. I’d seen the Indian guys in residence playing it but that’s about as close in contact I ever came to the sport. I had someone spend a good two hours trying to explain it to me but all I know is that it includes: bowlers, batters, different colours of green grass, people whipping hard balls at you, knocking some sticks to the ground, and that games can last 1-7 days. From what I gathered it’s a combination of baseball and soccer. Maybe a little bit of basketball as well…I’m not entirely sure.

The fun part of my night was when we got to the raffle draw. So many prizes were up for grabs but since there were a good 100 people in attendance I didn’t think my chances of winning were all too high. I had 5 numbers displayed in front of me and imagine my excitement when 170 was called!! I yelped when I read the corresponding number and went up to collect my prize with as much pride as Jennifer Lawrence when she picked up her Oscar. Luckily for me, I didn’t trip on my way. I got to choose what was left on the prize table and my options were: a) A fish ‘n chips dinner for two b) An autographed photo of some cricket team with all the members’ signatures c) bottle of brandy. Tough decision? I think not. *Just in case you haven’t figured out which prize I took back let me give you a hint; I can’t stand fish and chips and based on what I’ve told you about cricket I’m sure you can gather that my knowledge on the subject is fairly limited and thus, my interest in a signed team photo fairly low*

And why do I make a big deal about the Cotswolds? Because it’s just SO English. It’s considered one of the most beautiful places in the UK and has been designated as the Cotswold Area of Outstanding Natural Beauty. I’d love to show you pictures but when I go and visit I generally spend my days working

A lot of the rich Londoners have second homes in the Cotswolds (maybe equivalent to the Muskokas?) and if you want to go celebrity hunting you’ll find that the following either reside in the area or have homes there: Lily Allen, Hugh Grant, Stella McCartney, Patrick Stewart, Damien Hirst, Kate Moss, Elizabeth Hurley, JK Rowling, and Kate Winslet.

I spent the weekend at M’s grandparents place (yes, AGAIN!) and had a nice and tranquil weekend. Funny how if I were to “relax” in Bath I’d be bored but when I “relax” in Broadwindsor it’s just peaceful countryside living.

We attended a bingo event Saturday night to help support the village allotment group (they’re raising money for a new sprinkler system). We arrived at the town hall and I was surprised to see how many people were there. I didn’t think my competition was going to be so stiff and the competitive demon within urged me to buy extra raffle tickets and bingo books. Oh yes, let the games begin! 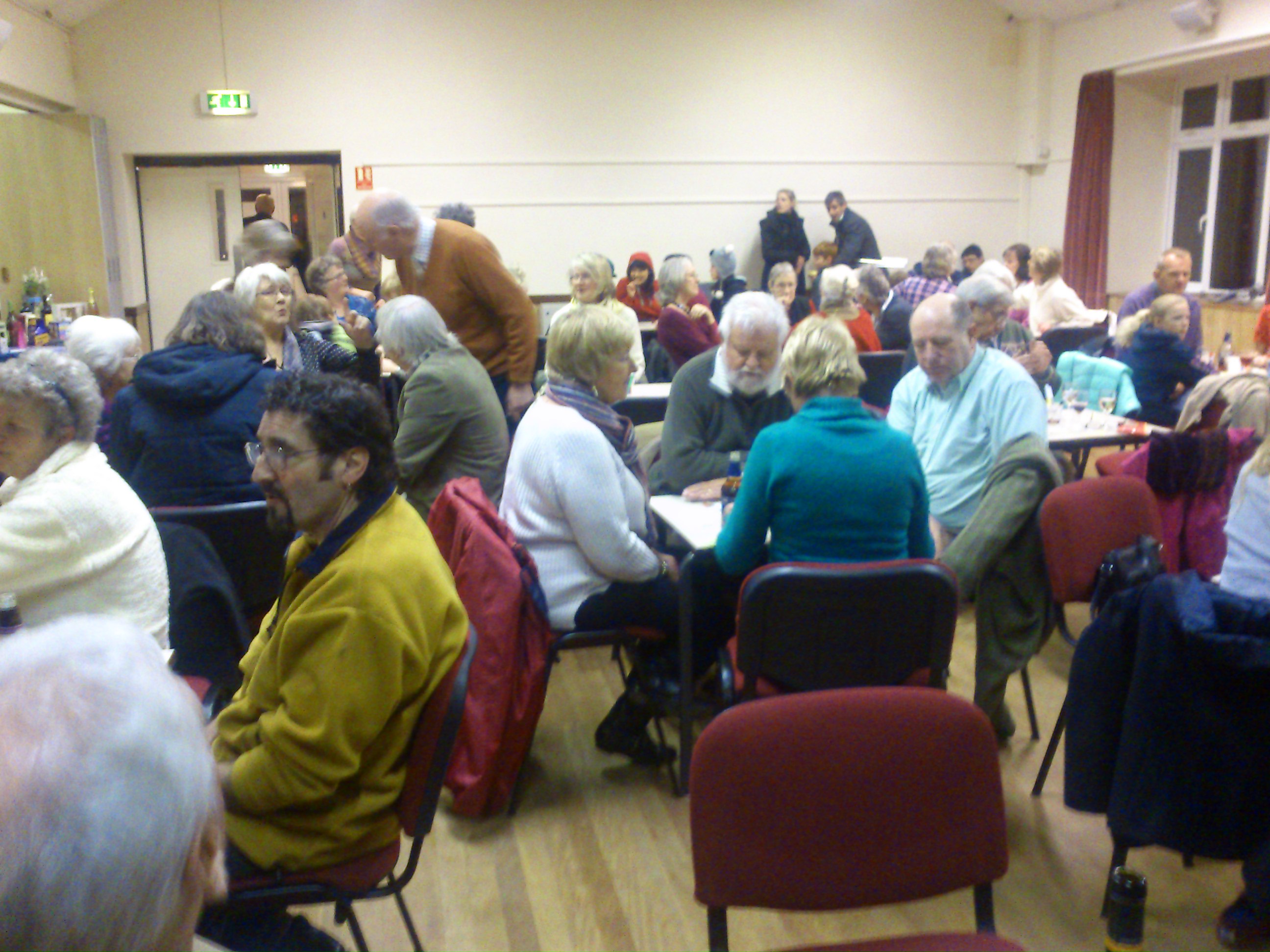 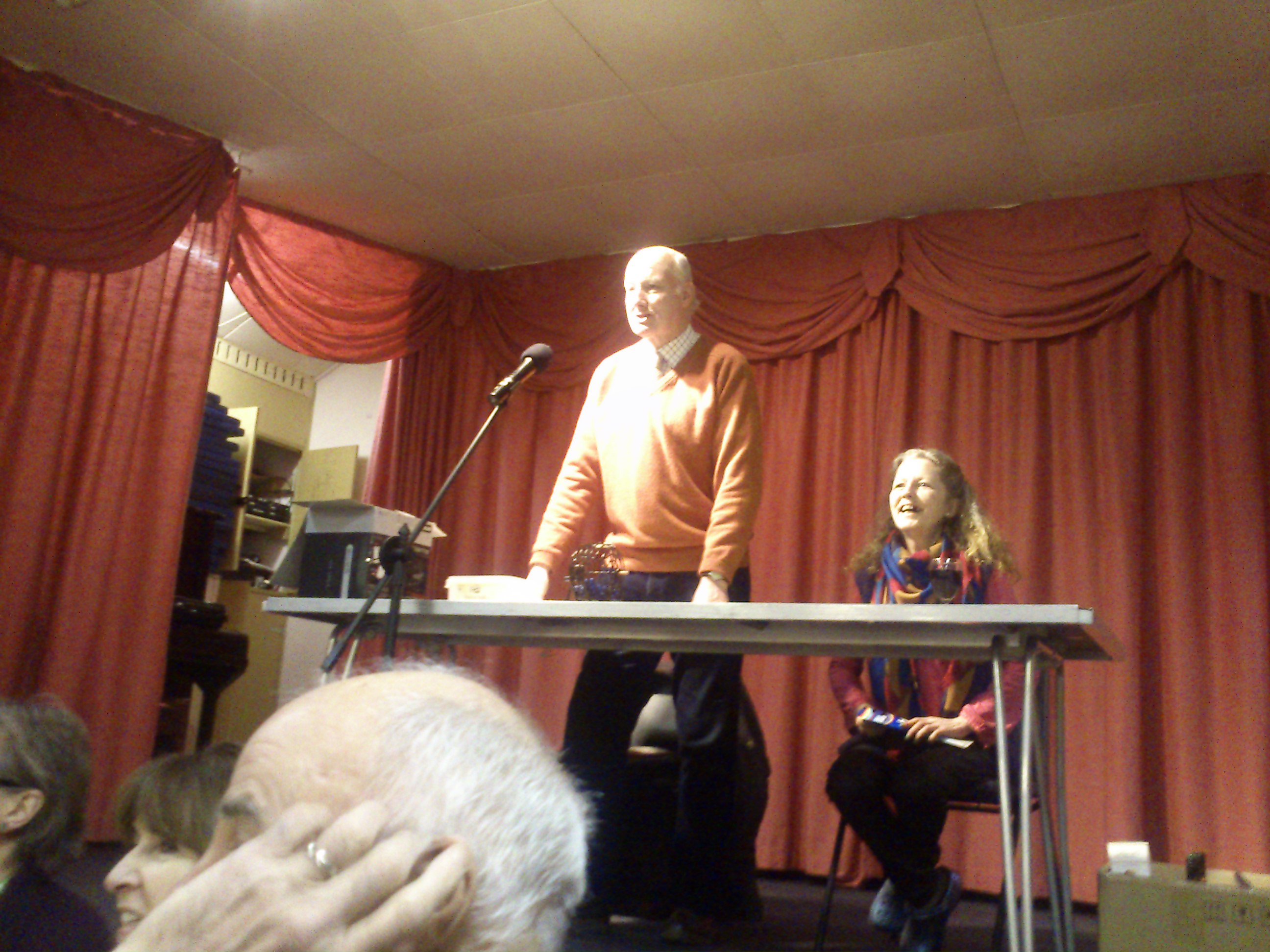 We had six rounds of bingo to go through and I had 3 bingo books in front of me. With prizes being handed out to those who completed a full line and for those who got a full house, I figured my chances of winning were pretty decent.

WOW, what an intense night! I was seriously sitting on the edge of my seat every time I was one or two numbers away from yelling BINGO. I knew I was on the cusp of winning and just needed one more number to be called – 40. I told my table I was just one number away from winning and M told me not to make a big scene and to just calmly state “House” if the magic number was called. Guess what, folks? The magic number was called. Did I stay calm? Hells no! I mean, you always HOPE that number will be called but you never actually EXPECT it to! I’m not one to keep excitement bottled up so I let everyone in the hall know that I appreciated my win and proudly walked back to my table with a delicious box of truffles in hand. 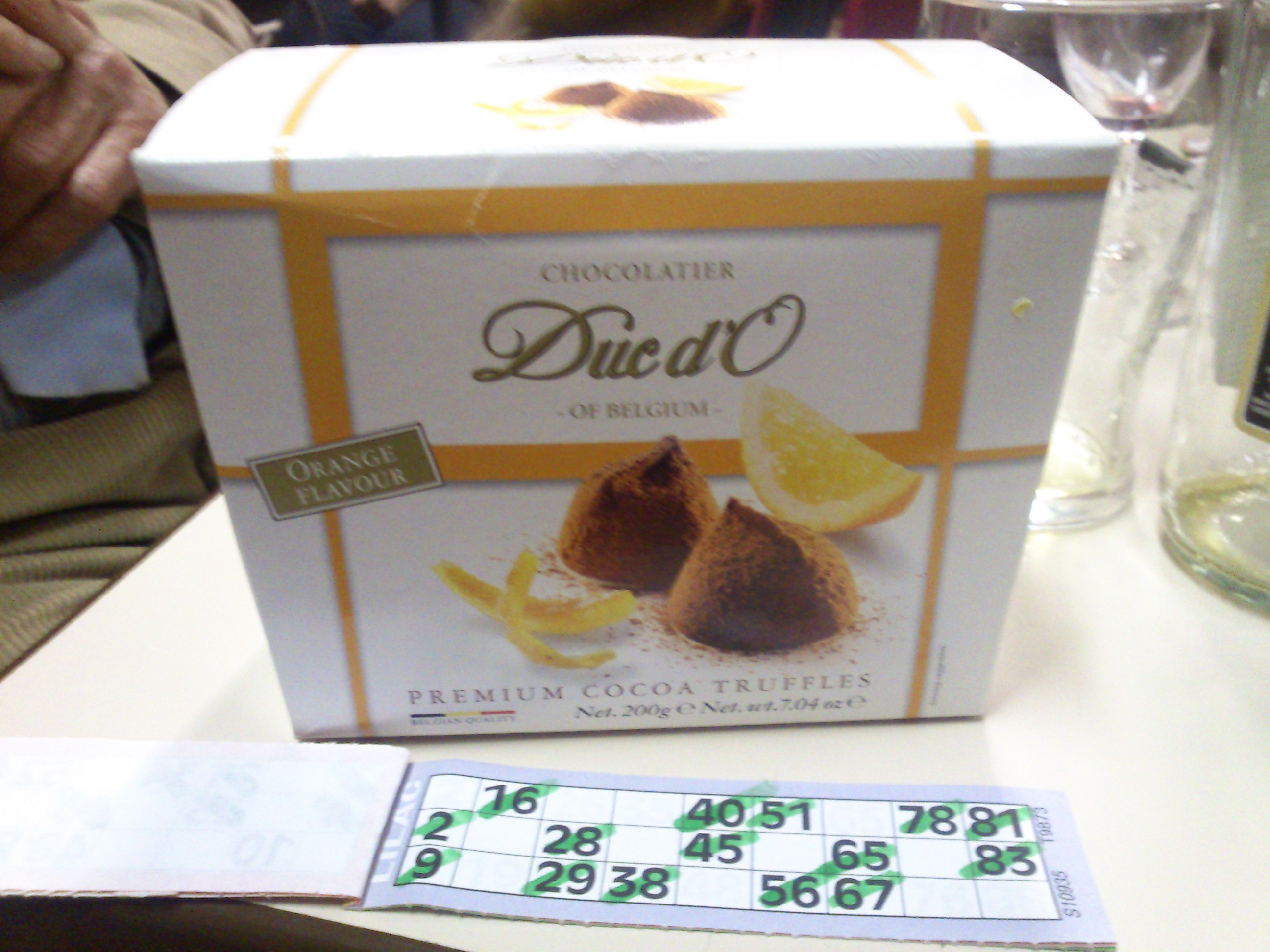 I made it through the rest of the game without a win (Thank goodness! It would’ve been embarrassing to collect another prize and I didn’t wish to have the town wanting to throw eggs at the foreign girl) but was still excited when it came time for the raffle draw. I had scoped out the prizes when I first walked in and had my eye set on a chilli and smoked salt grinder. I’ve come to love kitchen products and I could hear the soul of the grinder telling me to buy raffle tickets…that I was meant to win it. So I bought 3 strips of raffle tickets (I never buy raffle tickets!). Number after number was called…M’s nan’s number was called and she was so chilled about it. She walked up, collected her tin of shortbread cookies and came back to the table all nonchalant, like “meh, I win prizes all the time…no biggie” (Yes, that’s exactly what she said…). 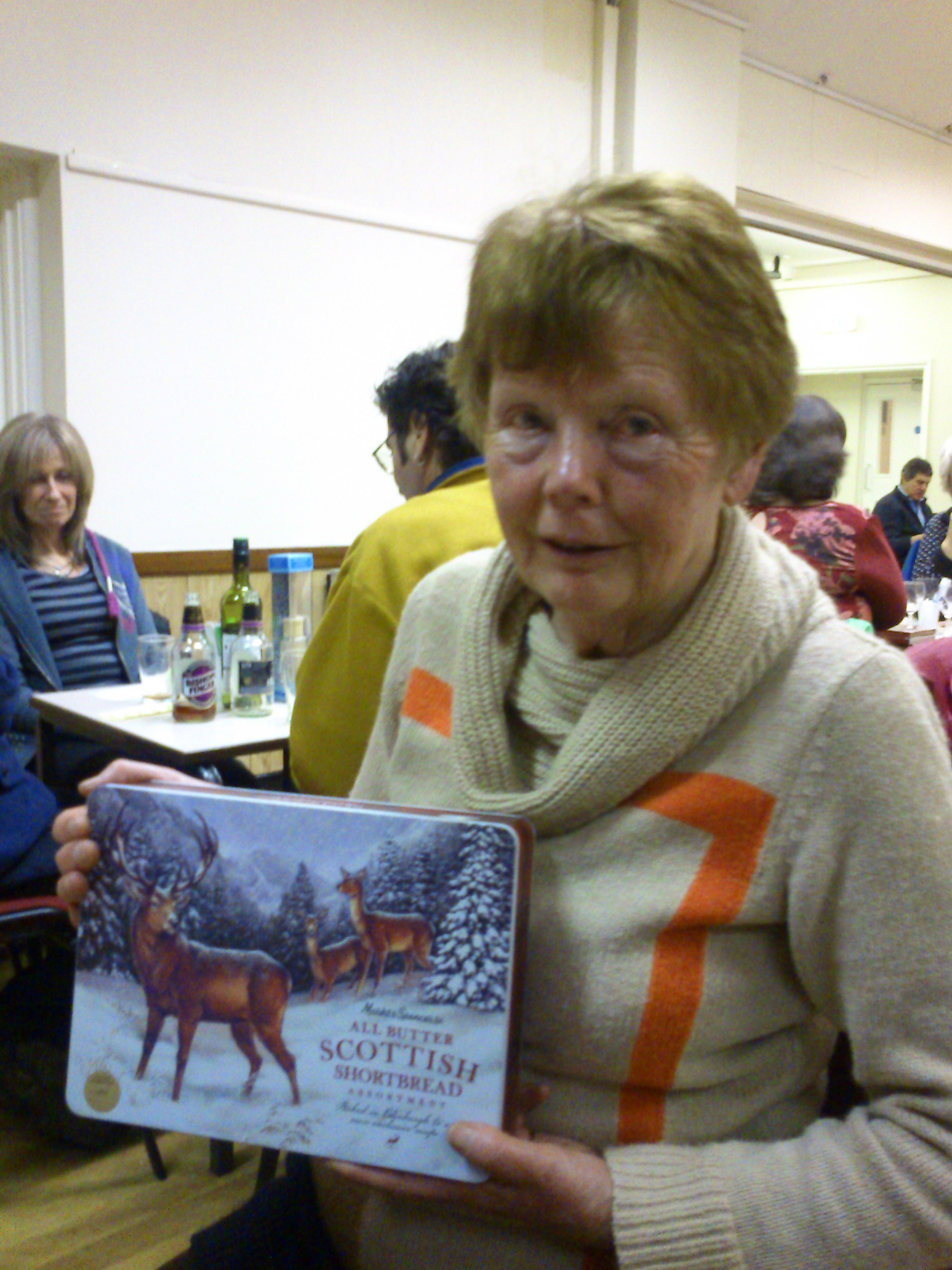 I’m sure you can guess what happened next… “yellow – 240”. AAAHHHHHH!!!! ME!!!!!! Yes, I jumped up and I got excited. And I realized as I went up to collect my beloved grinder that there were, in fact, people who wanted to throw eggs at me. I came to this realization when I overheard someone say “that girl AGAIN?” 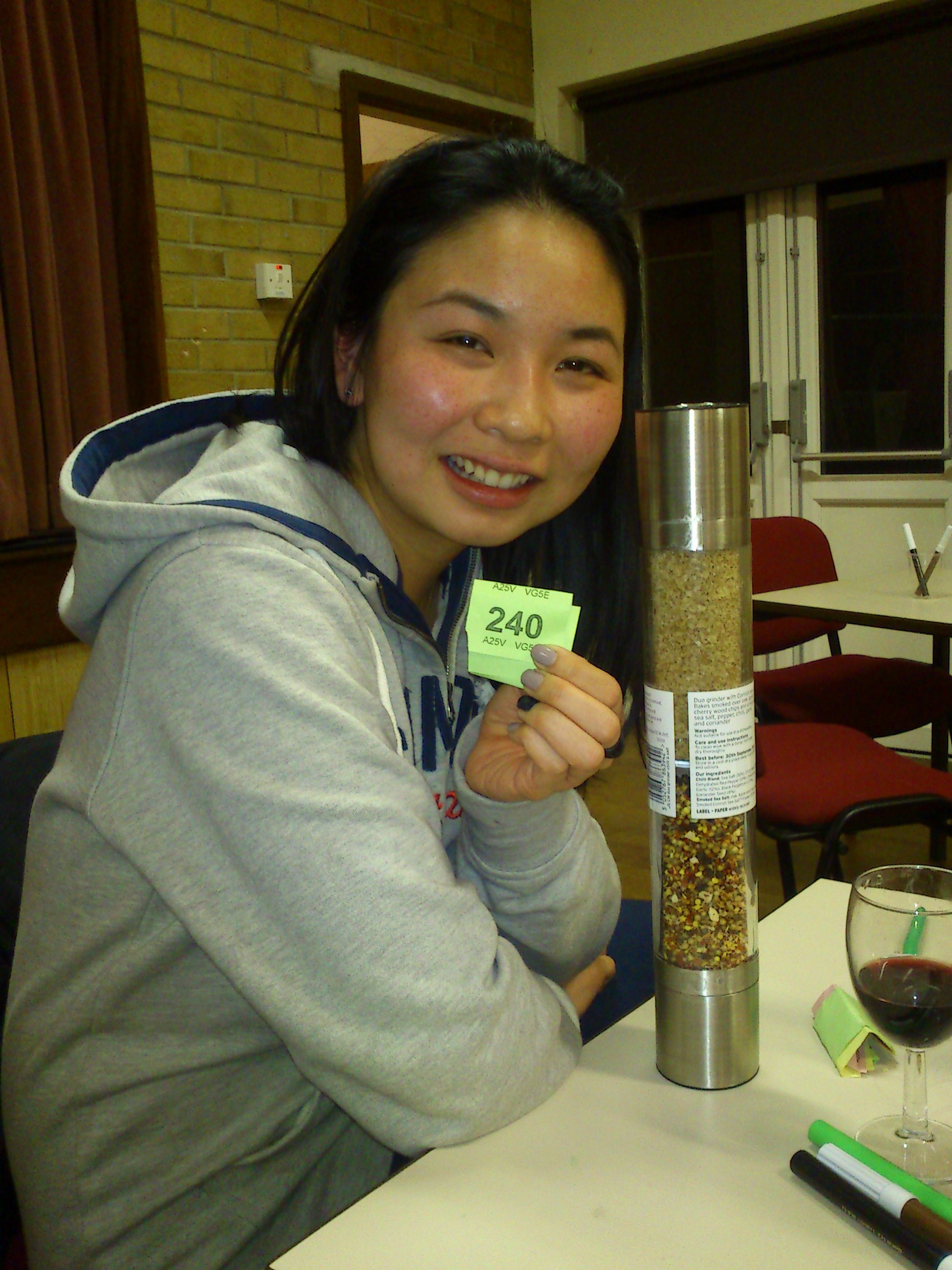 My lucky streak may have continued all night long…if someone did throw rotten eggs at me I managed to escape completely unscathed. So, what am I having for dessert tonight? Just some truffles sprinkled with smoked salt and chilli with a snifter of brandy 😉