Let’s play 2 truths and a lie.

2) I despised The Hunger Games movie

Challenging game, huh? In case it’s not evident, the lie is #3 (if you need proof of how much I hated The Hunger Games please feel free to read the post I wrote about it). In actual fact, I looovvveeeddd Catching Fire. Perhaps it’s because I went in with low expectations due to my first Hunger Games experience (to this day I haven’t been able to get over my disappointment), but I came out of the theatre excited, stimulated, and eager to watch part II.

Catching Fire was officially released Nov 21 and that’s when I went to go see it. At 12:31am GMT Nov 21 to be exact. M and I went to see Thor the Wednesday evening (guess whose choice that was) when I noticed they were going to have a midnight screening. I have never been to a midnight screening and don’t generally care to be the first to see anything but for some reason I felt compelled to attend the one for Catching Fire. I tried to be reasonable and tell myself to just go next Wednesday and save £10 using my Orange Wednesdays 2 for 1 code but obsession started to take over reason. Here’s how my evening unfolded:

We got out of the theatre at 11:10pm after watching Thor and walked home. It was cold, windy, and raining and M and his mum had one thing in mind: warmth. I tried to push away thoughts of watching Catching Fire but it just kept on invading my brain. All I could picture was the movie times screen and seeing my two options: 12:10am and 12:31am. At this point it was too late to catch the 12:10pm show but I knew there was time to catch the second show. M was already in the process of getting ready for bed but I still had my jacket on. He looked at me and knew what was coming next. He also knew there was no way he’d be able to get me out of it and with that, he put on his jacket and out the door we went. 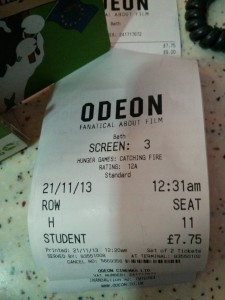 We left the theatre at 3:20am and I was beyond exhilarated. I haven’t read the books in over a year and that probably lent itself a helping hand in ensuring my enjoyment since I didn’t remember EVERY single detail of the novel. But whereas The Hunger Games was crammed into one 2.5 hour long movie, Catching Fire was split into two parts. This time around 2.5 hours of movie time covered half the book, which left me a happy duck since one of the main reasons I hated the first movie was lack of character and story development. My thoughts:

I felt much more connected to the characters and thought the screenplay and direction of the movie was excellent.

Woody Harrelson is phenomenal. I can’t think of a better person to play Haymitch than Woo-dawg and he was probably one of the only reasons why I would have remotely enjoyed the original film.

The costumes were fabulous. I remember being less than impressed the first time around but seriously, when Katniss’ wedding gown (gorgeous!) flamed itself into a mockingjay I was like “man…amazing…so badass…”. Even the over-the-top fashions of Effie were pretty awesome. Oscar nominations for best costumes, anyone?

“Let the 75th annual Hunger Games…begin!” Oh man, my heart was pumping and I was on the edge of my seat the whole time. I mean, I’m sure there’s more that could have been done in terms of detailing the games and developing the other victors a bit more but maybe that’s just me being greedy

I understand that the movie is rated 12A but I could’ve done with a bit more gore. The book made the games out to be quite gruesome and while I was kept on the edge of my seat, I wouldn’t have minded squirming a wee ‘lil bit.

All in all…a job very well done and those on my social media platforms have already been targets of my accolades. J-Law has risen up the ranks in my books (I still have yet to see Silver Linings Playbook FYI) and I’m expecting only good things from the remaining movies. So that being said, go watch The Hunger Games: Catching Fire and…enjoy! 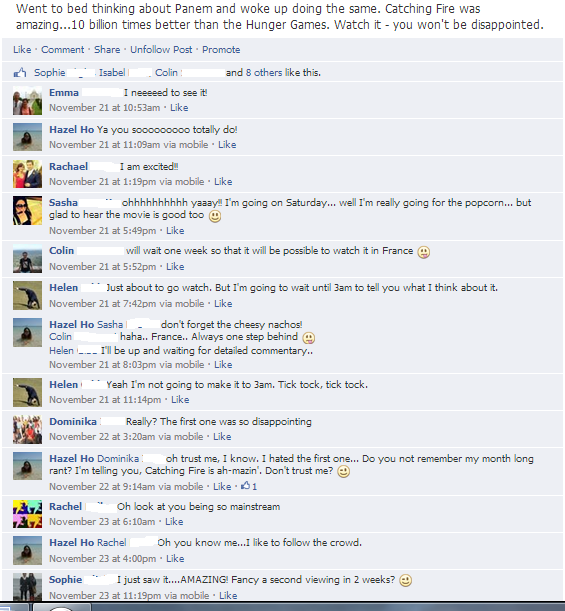