I’d like to make a statement: I am a good driver.

I’d like to amend my previous statement: I am a good driver in Canada.

I finally picked up the courage to do something I’ve been putting off ever since moving to England. The ever feared DRIVING ON THE OTHER (aka WRONG) SIDE OF THE ROAD. I didn’t enter the situation with arrogance or overconfidence. I was honest with both myself and M in stating to expect some pretty shit driving. And shit driving we got. I fit all the stereotypes of a female driver. And not only that, but a female Asian driver…stereotypically (bolding is necessary so I don’t have people biting my head off) a deadly combination. The rental car was returned with a chip and scratch that wasn’t initially there, but since my psychic skills predicted this happening I made sure to get full comprehensive insurance. *Whew* That saved some sweat under the armpits.

Anyhow, I believe I have the potential to be a…decent…driver here but there are definitely a few things I need to brush up on:

1. Figure out how to read traffic lights. This isn’t a joke. This may be a problem that lays solely with the City of Bath, but the traffic lights here can only be deciphered by geniuses. I mean….I’ve been to Vietnam. I know crazy traffic. 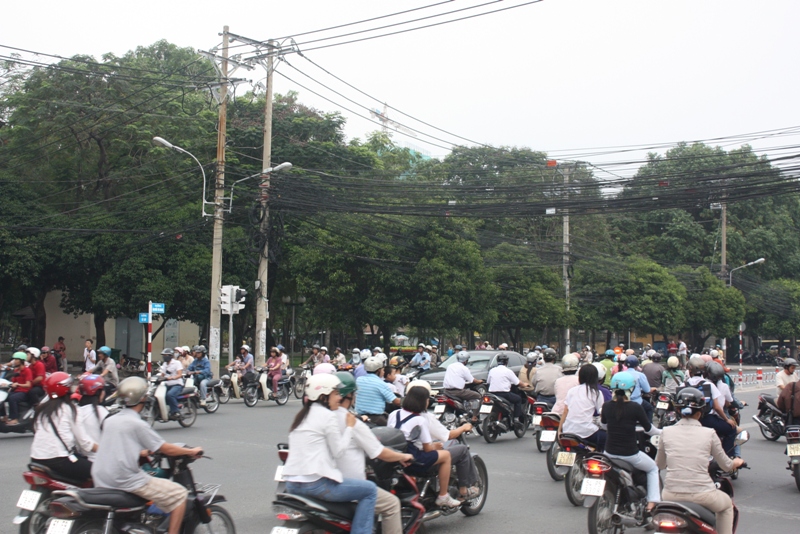 The insanity of the traffic in Ho Chi Minh City doesn’t compare anywhere near to the insanity experienced in Bath. I mean, take a look at this: 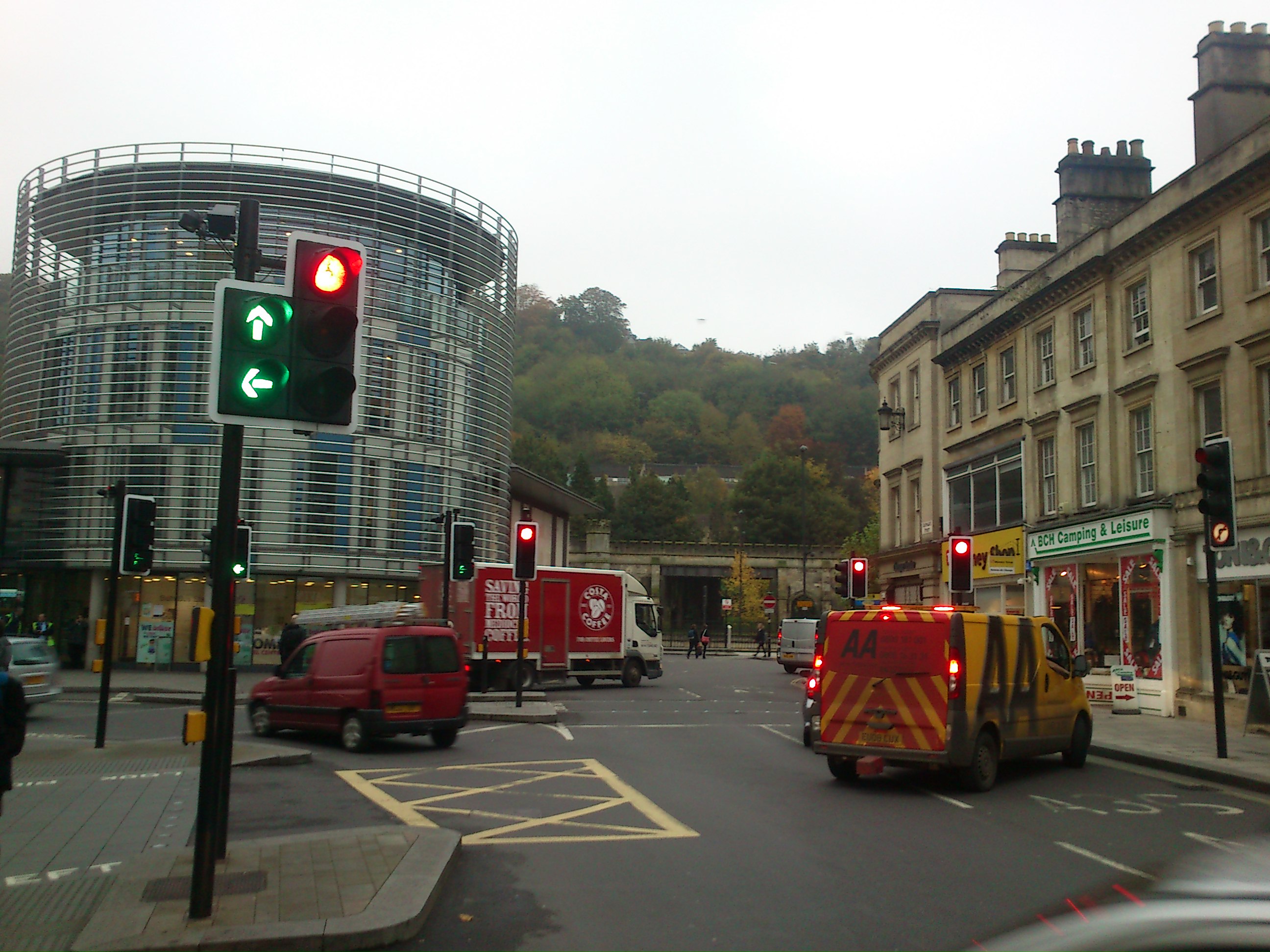 I spy with my little eye...7 traffic lights

How do you know which lights to follow??? There are 6 lights you need to focus on. So my dilemma was how to go straight-ish and then bear right. I had no idea which light to follow…either the green light with the straight arrow or the red light. Since I was going right-ish I didn’t want to assume that the straight green arrow was meant for me. My pride did not show itself in the slightest when I asked M which traffic light it was I was supposed to follow. I did experience some relief when he himself admitted he had no idea. Since I was the first in line I decided to just stay put. I figured I’d rather have cars honk at me for not moving than to go and a) get a ticket for running a red light b) get t-boned by a car. Would you have done the same? Take a wild guess whether I made the wrong or right move. Come on…50/50 chance of getting it correct. Ok, I did the wrong thing, which was evidently made, without haste, when the line of cars behind me blared their horns. Oops!

2. Learn the road signs. There’s signage here I’ve never seen in my life! The UK does a lot to keep its drivers on their toes, such as having incoming and oncoming traffic merge into ONE lane. If you see a car heading your way you stop, unless you want to experience a head-on collision. To my non-UK (and non-Australian…non-HK) readers, would you know what to do here? 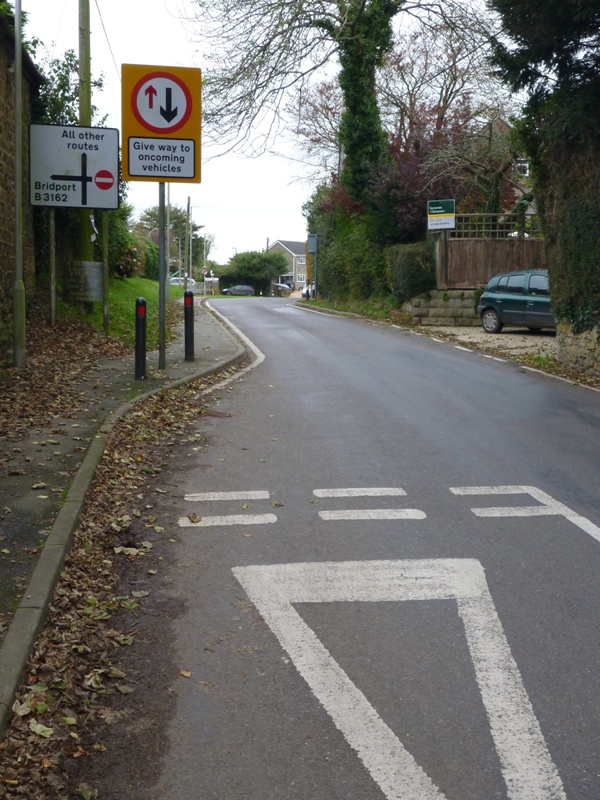 Would you just go? Or would you sit and ponder for a bit and see whether it’s safe/legal to go? Well, just in case you’re ever faced with this dilemma here’s what you need to know. If you find yourself facing a sign with a big black arrow (that so happens to say “Give way to oncoming cars”) that means you need to hang tight and let the other cars go first. If you see it empty like this then you’re free to go. If, on the other hand, you find yourself facing this: 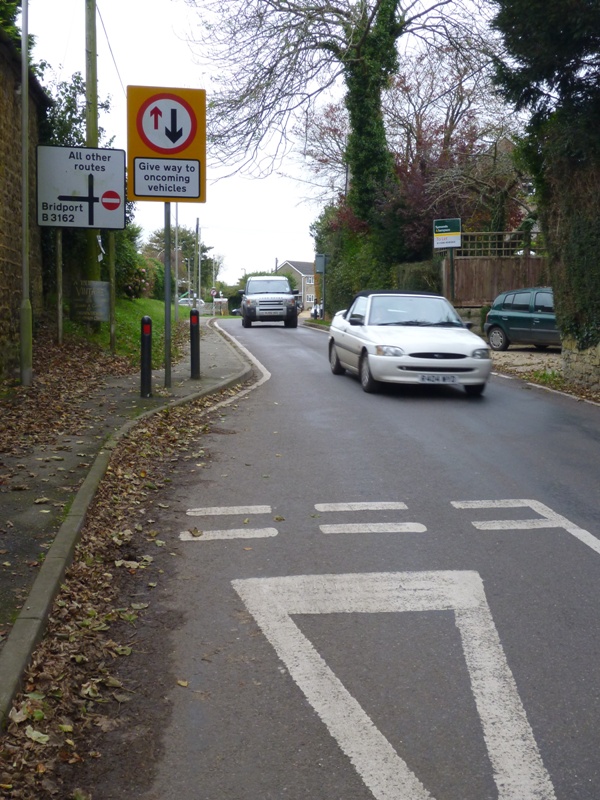 Sit back and wait

Then you have to hang tight until the coast is clear. The signs appear and alternate frequently. You know you have the right of way if the red arrow is big and bold.

3. Gage my distance properly. I incurred some perception problems when I got behind the wheel which I’m attributing either to old age or lack of experience. I’m hoping it’s the latter but only time will tell. I drove a typical North American sized car (Toyota Auris FYI It’s a pretty sweet ride and I vouch the hybrid), which would’ve been fine if I drove on typical North American sized roads. I swear, the roads here are fit for Power Wheels, not adult cars. There were a few times where I found myself PRE-TTY close to cars in the incoming lane (to my right) so I went more to the left to slow down my racing heart. Sometimes when I moved to the left I found the car scraping things it shouldn’t be scraping. Just…hedges and stuff…I would never hit scrape a car and drive away…

4. 2 in 1 roads. Usually I’m a big fan of 2 for 1’s. This doesn’t apply when it comes to roads. In the countryside they often converge 2 lanes (I’m guessing because there aren’t enough drivers to justify making 2 lanes??) into one and every so often there will be more of an open space to pull over in case you find yourself facing an oncoming car. If/when you find yourself face-to-face with a car you’re supposed to play a game of chicken and see who moves first. I’m not sure what the courtesy rule is but basically, one car needs to back all the way up to the nearest open space, pull over, and let the other car (aka the winner) pass by. I think whoever has one closer to them is supposed to back up but some people can be pretty stubborn and refuse to back up. M’s aunt had a showcase showdown with a driver once…things got nasty. Someone had to get out of the car to “exchange some words”. M’s aunt ended up losing L I was told that someone actually petitioned to have a sign put up saying “Only enter if you are capable of reversing” on some of the roads but it didn’t pass. I actually think that would’ve been a good idea because reversing on those kinds of roads is definitely a mandatory skill. The picture below is an attempt to capture the size of the road but dark and rainy conditions prevented me from taking a decent picture. At this point I pulled off to the open space/pull over area to let a car pass, but do you get a sense of how narrow it is? 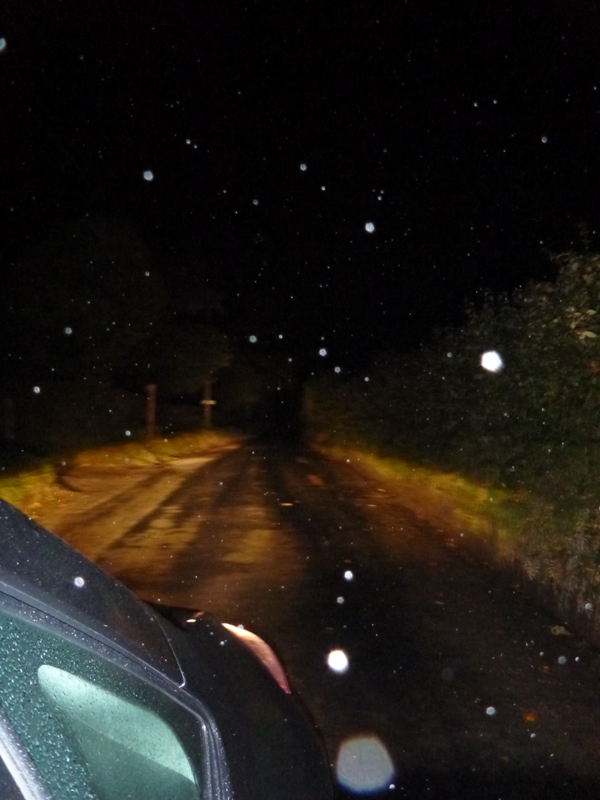 A nightmare of a drive

Well, one thing’s for sure, I’ll never take my wide Canadian roads for granted ever again! Let’s just say that driving on Fischer-Hallman is to UK roads what 1200-thread count Egyptian cotton is to…sandpaper.